What is Restriction Theory? 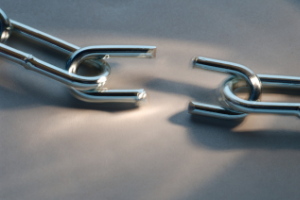 The Theory of Constraints is a managerial philosophy developed by Dr. Eliyahu Goldratt that is based on the scoop that the systems contain inherent simplicity. This means that the performance of the system depends on one or very few variables that determine its result. The most used example to explain this situation is the chain. A chain can be measured in several ways, by its strength or by its weight. If we want to measure the resistance of the chain, this will be the reflection of the weakest link resistance. This weak link can be considered the "restriction" of the chain. In the same way, it is the weak link of a system, or of an organization, that determines its outcome, its profits.

The inherent simplicity is related to the fact that even with complex systems, with thousands of people interacting, a logistics complexity of customers and suppliers, with a market of high competition, the restriction will be one and the profitability of the entire organization depends on its performance.

The Theory of Restrictions (TOC) achieved its greatest visibility with La Meta, a book written by Dr. Goldratt. This business novel describes the situations that Alex Rogo, the protagonist must overcome, both in his position as operations manager, as in his family life. The book has sold several million copies worldwide and is disseminated in undergraduate and graduate programs in various universities. The lack of dissemination of other books by the same author has led to the understanding that TOC is exclusively applicable to production, which is not true.

After La Meta, Dr. Goldratt wrote "It wasn't Luck", a book that continues the story of Alex Rogo and explores the logical tools of the Theory of Constraints, especially the evaporation of clouds, a tool for conflict resolution and Undesirable Effects map, which is the cause - effect - cause relationship of seemingly random phenomena. He later wrote Critical Chain where he describes the TOC solution for project management.

Later he wrote Necessary but not Enough, a book that talks about innovation and technology as necessary but insufficient elements to achieve high-impact results, the focus on the critical problems of organizations is required. In 2008 he published The Decision, a book he publicly recognized as his most important work and where he presents the philosophical principles to apply OCD to individuals. His last novel was not obvious? In which he presents the history of a retail business (retail) and how they discover how to operate without relying on forecasts by applying TOC. Additionally, he wrote other works that delved into the technical details of the methodology such as La Carrera, What is that thing called Theory of Restrictions ?, El Pajar Syndrome, among others.

In one of his last public documents that Dr. Goldratt titled On the Shoulders of the Giants, the author presents the universal concepts of flow, where he compares the model of Henry Ford, the Toyota production system of Taichi Ohno and his Theory of Restrictions From his conclusions he presents that these models follow these steps: 1. The flow is the most important. 2. Avoid overproduction. 3 Local efficiencies must be abolished. 4. Implement a Continuous Improvement Process.

These four elements are currently used to apply TOC in environments such as: Operations, Distribution, Retail, Project Management, Marketing and Sales. Applications that complement the principles that describe how to evaluate financial decisions, called Tribute Accounting. The last tool that Dr. Goldratt developed was called Strategy and Tactical Trees, which are the navigation map of the strategic changes that an organization can apply, either to use the elements of TOC or for any strategic initiative that arises .

One of the main characteristics of those who implement Dr. Goldratt's methodology is that they obtain almost immediate results. Except for operational and communication adjustments, the suggested changes, when applied in the restriction, present notable evidence in weeks. In 1999 St Lucie Press published The World of Theory of Constraints, where it presented this average results obtained by the companies investigated.

Currently the researcher who has contributed to the tools of Goldratt, is his disciple Alan Barnard, who is co-founder of Goldratt Research Labs and whose objective is to develop new knowledge to the Theory of Restrictions. Alan developed a model for decision making that I name cloud pro / con. With this development, it intends to systematize strategic decision-making through an evaluation of the positive and negative aspects that may arise and thus achieve more results in less time.

"If this article is to your liking, you may also like "Project management with critical chain ”